It’s been a long a long time coming, hard work has finally paid off and the last 7 months feels like just only few weeks. Couchbase is now our primary NoSQL (key-value) store for production and we are impressed with the results. This article is about our hands-on experience, benchmarking results and its associated challenges.

We work in the online advertising market and for today’s internet user speed is everything. Therefor, latency is paramount in our application design thus, we needed something fast to store various user information including targeting data. Few years ago, the choice was Voldemort for its latency and speed, but unfortunately the product was not only vulnerable to cluster changes and disasters, but also was featuring small user group so support was difficult. memcached always looked promising but the lack of clustering and disk persistence was too expensive for our production suite.

Then Couchbase (membase with persistance backend) came along which was pretty new on the market, was going through couple of re-brandings in a short period but it used memcached under the hood along with seamless clustering, auto-recovery and disk persistence. Sounds like a dream? Well it was, but we had to wake up quickly in the middle of our migration because it was just not going the way we wanted to.

As usual, one of our development team grabbed the Java SDK and started working on the code to implement a client in our production suite. In the meantime we carved a new cluster out of 4 servers with the following specs:

It appeared to be a capable beast and after a short period, we started populating data to it in parallel with the existing Voldemort stores. We loaded approximately 160 Million, keys to one of our high throughput buckets within a matter of weeks.

Initial tests showed poor latencies of 5ms and our application was throwing zillions of errors within seconds so we started refactoring. We added MBeans to have visibility, gone over the SDK documentation number of times, added debugging metrics and it seemed whatever we do, it is just not working out for us. We began monitoring the servers themselves and noticed that our utilization (context switching, interrupts) do not seem to be affected by our application tests, so I started believing that we trip somewhere so early, that we don’t even make it to the “buckets”.

This went on for some time, even engaged the commercial support which was helpful to pinpoint potential issues in our setup, but we have not really got much difference in results and our team really exhausted all of its options at that point of time. Couple of months later we felt that it’s time to look for something else and my team began looking at AeroSpike with the exception of me. I simply refused to give up and was unable to accept failure.

Without much motivation I continued looking, and after so many hours of troubleshooting, Google searching I bumped into something promising we should have (perhaps) looked at much earlier, the Java Load Test Generator from the community wiki. Disregarding our “sprint” plans, I grabbed a couple of developers along with the code and started a (somewhat) secret project to work on a “real load tester” application. The code was a bit hard to read but we managed to modify it so it worked with our keys from the pre-populated (160 million) data bucket not with some random generated garbage. We fired it from a single node and immediately managed to squeeze more juice out of the cluster than ever before.

This is when the real development commenced with real, production data, on our production suite although we carried out the exercises off peak for our customers’s safety. We had to play with the setup to find the sweet spot and after a day of testing, we finally made a breakthrough. Of course it became obvious that our client implementation was the problem not the product but without having another implementation alongside and of course enough hands-on experience, it was impossible to prove. In a couple of weeks time, we completely refactored our client implementation based on the load tester and I am happy to say that it’s in production now for a good couple of months without a single glitch. 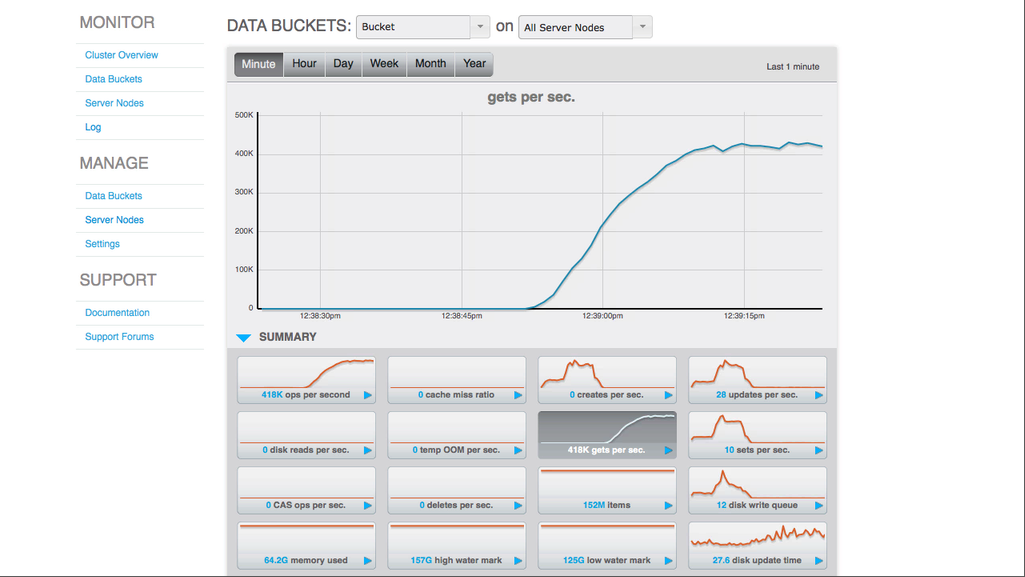 It seemed that Couchbase really shines between 15% (~75K) and 80% (400K) of it’s max throughput (520K). Low volume buckets (1-2 GETs / second or less) only reach 600 - 700us regardless of disk write queue, resident ratio, etc. This suggests that perhaps there is some kind of prefetch mechanism for actively requested data sets so if you request something frequently, you get better results. Adding more nodes with less memory would increase throughput, improve bucket sharding, reduce network generated interrupts.

Couchbase performs better under pressure but you have to keep the pressure within 80% of your maximum throughput to maintain lowest latency.

Couchbase 1.8 supports two types of buckets but the memcached bucket is limited, does not support persistence, failover so this article is about the couchbase bucket type and its maintenance. We t...

For modern, high performance web applications we need low latency and Couchbase excels in that. To maintain the lowest possible latency even during node failure, we need to achieve 100% resident ra...

This issue puzzled me and even AWS support for weeks, although for the later it was mostly because of their availability not their skills: I pushed in an update for one of my pipeline managed s...